Established in 1933 by Mrs Lottie Wood Narrabeen Ladies Amateur Swimming Club has evolved from a ladies only team to become one of the few sports that the entire family can partipate in. That family togetherness is something the entire club treasures and actively fosters.

The club was formed on the 17th September 1933. A Mrs Lottie Wood was the initiator of this ladies only swimming club. At this meeting a group of office bearers were nominated, a list of 23 club rules were adopted and a membership Fee would be: Seniors 3pounds; Juniors (under 14) 1pound 6 shillings.

The initial membership was 30 which grew to 83 by the end of the first season.
The club would be affiliated with the NSWWASA (New South Wales Warringah Amateur Swimming Association) 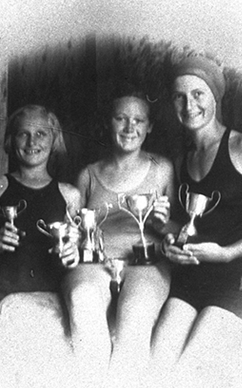 The club colours adopted were to be black and lemon, which remain to today.
Club events would be held every Sunday at 10am.

The first of these meets was on the 8th October 1933 in the Narrabeen lagoon as the North Narrabeen Rockpool was yet to be completed. The ladies had to rally male members of the North Narrabeen Surf Club to assist them initially in providing boats to sit the judges and timekeepers in and to also help in roping off the area and providing ‘touch lines.’ The surf club also assisted in building a ‘starting platform’ in the Lagoon for the ladies.
By season end the ladies had acquired all the skills and equipment necessary to continue holding their race meets by themselves, The rock pool was completed and races were held under easier circumstances from then on.

The local council assisted NLASC greatly and provided a ‘club room’ which has since been extended and still stands today.
NLASC has competed in Inter-club carnivals since inception and enjoys meets with other swimming rock pool clubs to this day.

The Changing Face of NLASC

At the AGM 20 September 1987 it was proposed to have an extraordinary meeting to be held on 18/10/87 to discuss the Notice of Motion (moved by Mrs. Crowley, seconded Mrs. Sadlier) that the constitution of the NLASC be altered to allow male members into the club.

At the AGM 22 Nov 1987, 2 males were nominated to be elected for the committee for the first time.

Learn to Swim for Free Program

The LEARN to SWIM for FREE program was started in 1960 by members of NLASC. The club offered free swimming lessons every Saturday and Sunday between November until March.

This volunteer program went on to teach over 15000 children. Many of these children went on to join the club and become involved in the swimming races available. One of these participants was JENNY TURRELL who was a commonwealth gold medal winner in the 1974 Christchurch games; 800m FINA World Championships winner and 1500m world record holder in 1976.

The chief instructor of more than 20years, Judy Dubois, received the Community Service Award from Pittwater Council in 1998 for her dedication and efforts in the learn to swim program. Judy was invited to be a torch runner in the 2000 Olympic Torch Relay.

In 1992 the NLASC and learn to swim program received a Highly Commended Award from the NSW State Government.

The Learn to Swim Program continues its volunteer services to this day.